Journey of a Lifetime… Second time around

Published in the Brandon Sun | Posted By: John Simpson | 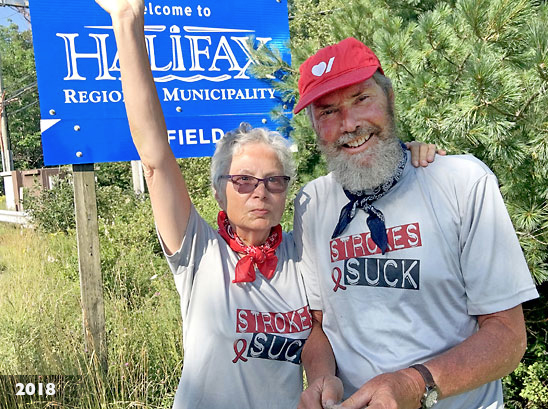 Our first ride across Canada…

In 1999, my wife Laurel McLaughlin fulfilled a childhood dream and crossed an item off of our shared bucket list. We pedaled our mountain bikes 8,045 kms across Canada, from Vancouver, British Columbia to St. John’s, Newfoundland.  We loved the adventure, and the slow pace was the perfect way to take in the Canadian landscape. It was also the perfect way to experience kindness and generosity on a near daily basis. In Saskatchewan, a pleasant woman offered her home for us to spend the night. In New Brunswick, an elderly gentleman insisted on giving us $20 to buy lunch, and while gravel pit camping in rural Newfoundland and Labrador, a couple who were, “on the brown envelope,” welcomed us into their cramped but cozy trailer to share homemade bread and strawberry jam.

The ride had its share of struggles and anxious moments. It seemed to take a lifetime to climb the mountain passes in British Columbia, and in Ontario it was often a balancing act while trying to ride a thin strip of shoulder alongside the constant flow of traffic. Laurel came within an inch of colliding with a black bear when careening down a steep mountain slope in British Columbia. The bear, luckily, was more startled than Laurel, and made a quick about face back into the bush. In another instance, we waited anxiously before a nearby cougar decided that we were no longer worth its steely-eyed attention.

‘Turtles of the Road’ and a new plan ahead

Laurel and I have always characterized ourselves as the turtles of the road. We ride slowly, but with determination — we enjoy smelling the roses along the way. Eventually, though, after two and a half months, we completed what had been meant to be our “journey of a lifetime.” St. John’s Harbor and the Atlantic Ocean were beautiful sights to behold, but we hadn’t arrived without some sadness that our journey had ended.

Since that time, Laurel and I have ridden our bikes together to San Francisco, Chicago, throughout Manitoba, Saskatchewan and North Dakota, in western Ireland and along the North Sea in England.  About three years ago we decided that it would be fun to repeat our original cross-country ride. Already nicely into our sixties, it would be, in all likelihood, even more challenging than the first time. We weren’t really sure if we were up to the task, but we were both game to try. Two years seemed like adequate prep time at that point. We would fly to Vancouver with our bikes and trailer disassembled and in boxes in the late spring of 2017. As before, we would reassemble the bikes and trailer at the airport and begin pedaling east. That was the plan.

From headaches to stroke…

In early August, 2016, the plan changed. Laurel had always had occasional, severe headaches, but this one was different, even more severe, and more persistent. Neurologists call it a “thunderclap headache.” After days of “feeling off,” a visit to the doctor and a subsequent, urgent referral to the emergency department of the Brandon Regional Health Centre, confirmed that Laurel had experienced a hemorrhagic stroke — a brain bleed. From there, she was quickly transported by ambulance to the Winnipeg Health Sciences Centre for further testing.

Over the course of the weekend, the MRI and CT scan came up empty: there was no visible evidence of an anomaly, apart from the bleed itself. Medical opinion suggested that Laurel’s hemorrhage may have been a “one off” and that she might never experience another episode. Laurel was also improving on a daily basis. Her headache had disappeared and her slightly hesitant speech pattern was diminishing, as was her trace of disequilibrium. She was almost back to her old self. A bit embarrassed, she joked that she felt like a fraud for taking up a bed. With one final test, a cerebral angiogram to confirm the presence or absence of a malformation or aneurysm scheduled for Monday, we expected to be back home in Brandon later that afternoon.

No one thinks that they’ll be that one-in-one-hundred person. Laurel, unfortunately, drew the short straw. The catheter used for the cerebral angiogram caused what was described by neurologists as a “shower of emboli,” producing multiple, additional strokes. Laurel was left paralyzed and unable to effectively swallow. Her hearing, vision and speech were impaired, and she had difficulty staying awake. My sister-in-law, a pediatric intensive care nurse from Ottawa, was alarmed enough by Laurel’s depleted oxygen levels that she advised me to “prepare” our three adult children. It was only sometime later that I was able to process what she had actually meant. I wasn’t prepared myself. Laurel had always been the strong and fiercely independent one, and the possibility of her death had never crossed my mind. In fact, a few years before, I had taken great pains to provide her with pension details, passwords, and photographs and songs that I wanted shown and played at my funeral. I was confident that she would outlive me. No, I wasn’t ready for Laurel to die.

More important, Laurel wasn’t ready. After ten days in intensive care, Laurel was transferred to the stroke recovery unit at Brandon’s Assiniboine Centre. We knew that the most dramatic improvements, if they were to occur, would likely take place within the first three months following the strokes. On cue, and with the guidance of the fine rehabilitative team at the Assiniboine Centre, Laurel began to improve. We celebrated the first time that Laurel was able to move her paralyzed right hand, and when she had her feeding tube removed and replaced with a carefully monitored pureed diet. And, we were ecstatic when Laurel was able to move her right leg, and with the help of three physical therapy team members, was able to walk a path between two parallel bars.

Determination and the road to recovery

By the time of her discharge in late October, Laurel was able to travel short distances with a walker. With care, she could slowly consume solid food. Her strength had measurably improved. Laurel remained paralyzed on the left side of her face, so that her speech and vision, though improved, continued to be affected. Over the next year and a half, the Brandon Shoppers’ Mall became Laurel’s therapy centre. We walked the mall on a daily basis, increasing distances over time. Laurel also incrementally increased her level of independence, moving from total reliance on her walker to part time reliance — she would use the walker for three “laps” and hold on to my hand over an additional three laps.

Laurel’s recovery was aided by the community of friends that we developed while walking regularly at the mall. They consisted of other walkers, mall employees and folks who would frequently meet to have coffee in the food court. They became Laurel’s informal support system. Whether with a smile and nod, a thumbs-up, or an encouraging comment, they cheered each sign of progress.

At some point during Laurel’s informal rehabilitative process, we decided to resume cycling. We knew that disability and inability are not the same things, and we figured that by adapting to meet Laurel’s current needs we could once again enjoy cycling together. Because of her poor balance and limited vision, Laurel could no longer independently ride a bicycle, so, after doing our online research, the adaptation that we came up with was a tandem recumbent trike. With the tandem’s independent pedaling system, we could ride together, but we could still pedal at our own, preferred rates (Laurel’s preferred pedaling rate has almost always been faster than mine).

While we continued to walk at the mall during the summer of 2017, now, we also cycled. Our 10-foot-long TerraTrike Tandem Pro caught the attention of many onlookers as we pedaled the streets of Brandon. Children were particularly unguarded in their enthusiasm. With the trike’s multiple flags to increase visibility, we felt a bit like the advanced guard for the Travelers’ Day Parade.

By summer’s end, Laurel’s endurance had increased to the point that we could count five return trips to Carberry and an overnighter to Virden, Manitoba as notable cycling achievements. We rekindled the idea of once again riding across Canada. Over time, however, we decided to modify the trip, and instead, pedal from Brandon to Halifax, N.S. So, on May 26, 2018, at ages sixty-eight and sixty-five, we hitched our trailer to the back end of the trike, and we began pedaling east down the TransCanada Highway. On July 30, after riding 4,600 kms. (2,850 miles) through five provinces and four states, and one day before the two-year anniversary of Laurel’s original stroke, we arrived in Halifax.

Sweltering heat had seemed to follow us from west to east, and at times the only shade to be found was in the shadows cast by telephone poles. Laurel’s determination, however, never wavered. It didn’t waver in the extreme heat or while getting soaked to the bone by occasional downpours. It didn’t waver when climbing New Brunswick’s edition of the Appalachian Mountain range, or any of the other steep slopes that we encountered. And, it didn’t waver when she was unceremoniously dumped from the trike on at least three occasions, including the time that we scrambled chaotically to escape a car that seemed intent on backing over us. There were no blue ribbons or trophies at the end of our journey, only the bumps and bruises that Laurel had sustained along the way, and the deep satisfaction that just shy of two years after Laurel’s original stroke we had completed our real journey of a lifetime.

Throughout our journey, we were often stopped by people interested in the fourteen-foot ‘train’ that we were pedaling, and in Laurel’s story of resilience. “You’ve got a lot of guts lady,” and “You’re an inspiration” were impressions that people often shared after meeting Laurel. Though she’s forever a humble and unassuming person, Laurel’s hope is that her story might also provide some measure of inspiration for others who have experienced a stroke and who are currently on their own journey of recovery.

Read the original article on the Brandon Sun.