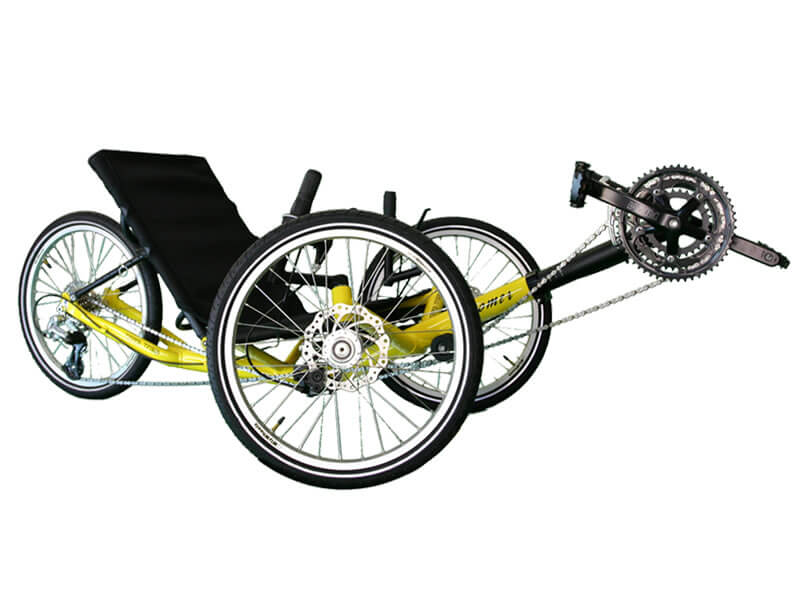 It’s been a long time since I have reviewed a TerraTrike. In fact, it was the debut Edge, the carbon fiber trike with the chain running through a frame tube. Wow, that was a long time ago! So, I think I’m due, right? I thought so – and I grabbed the opportunity to ride a TerraTrike Zoomer.

This isn’t a new model – in fact, a friend of mine had one a couple or so years ago, even bought the optional 26” rear wheel for it. He rode it all over the place, put lots of miles on it. He rode it so much, that I never did get a chance to try it out – which helps explain my eagerness in grabbing some time on this Zoomer.

One of the first things I noticed on my friend’s trike, as well as on this one, is the handgrip position. I am so used to haveing vertical handgrips on trikes, that it just seemed so odd, looking at the horizontal ones on this Zoomer. But after riding it for a while, I thought: why aren’t there more like this? It’s comfortable, and feels so natural.

For those of you familiar with some of the other models in the TerraTrike lineup, the feel of the steering may be a bit different, a result of the Zoomer having direct steering, as opposed to the indirect in most of the other TT trikes. At first, you may think oh my, this is “twitchy”. Give yourself a bit of time and a handful of miles, and you’ll be thinking “responsive” instead. This trike does not hesitate to go where you point it!