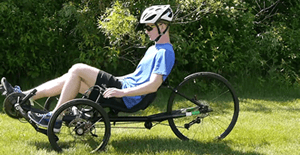 The new Sportster has been reviewed on BentriderOnline.com

One recumbent trike manufacturer that has seen much success in recent years is TerraTrike. Part of the reason is price: the Rover opened up an entirely new entry level trike pricepoint. And yet, some people wanted a little bit more – and then they unveiled the Rambler. Both of these trikes offered features that many buyers wanted, especially a comfortable ride on a trike that did not force them to squat very low. Yes, both trikes have been big hits, and while many of the more vociferous owners rebelled against any talk of “performance” – after all, they were riding them for far better reasons than “speed” – there were some out there who were thinking, how nice it would be to have the no-squat attribute with not just a bit more speed, but considerably more. In fact, these buyers would be willing to pay more, too. The result? Come join me in a ride on the new TerraTrike Sportster.